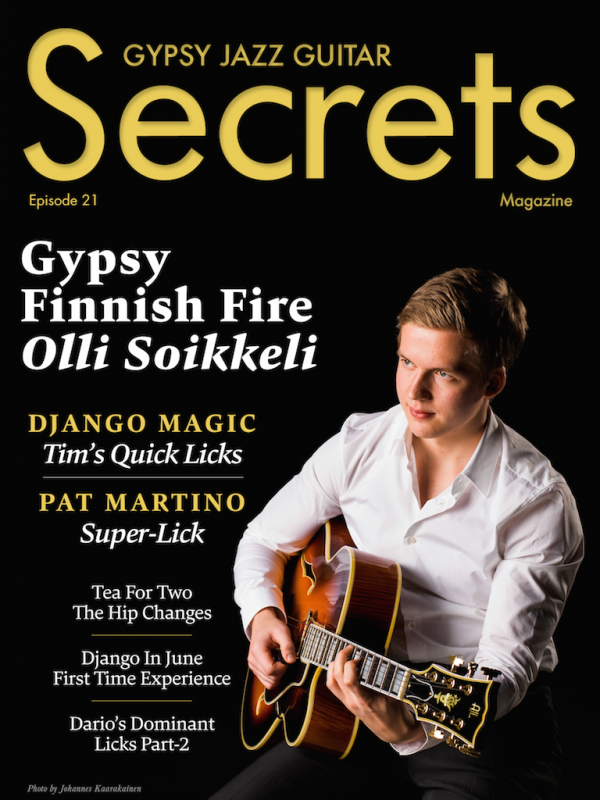 Olli Soikkeli - Gypsy Finnish Fire
Olli Soikkeli is without doubt the hottest new kid on the block in the global gypsy jazz scene. Hailing from Nurmes, a small town in Eastern Finland, Olli has become an international jet setter and at just 23 years old is already touring extensively and collaborating with some of the best gypsy jazz guitarists in the world.
La Pompe' Gypsy Rhythm Tips - Video Lesson
"In my travels as a guitarist I get the chance to meet many fabulous players and there's one question I always like to ask them “How do you like to swing?” Here I asked Olli Soikkeli for some tips on playing ‘La Pompe’ Gypsy Swing Rhythm."
Pat Martino - Hip Bebop Lick - Video Lesson
This is a very cool modern Pat Martino style lick which sounds great in gypsy jazz.
Django In June - A First Time Experience
This year I had the pleasure of going to Django in June for my first time and it was the best experience I’ve had as both a musician and a music lover. After years of obsessively listening to Django’s music and drooling over all the superb performances and interviews on Patrus’ Youtube channel I finally decided I needed to go and experience the magic in person.
Django Magic - Video Lesson
This lick utilises a common Django style enclosure embellishment which is repeated with slight variations descending through an F Major triad.
Dario's Dominant Licks Part 2 - Video Lesson
"Here’s a wicked modern gypsy lick you can use over a 2-5-1 in Dmajor."
Irene's Gypsy Jazz Adventures
About what struck me, touched me, made me laugh or left me in awe while dancing around with my guitar, my camera and my drawing pad in the international world of gypsy jazz.
Tea For Two - Hip Chord Changes - Video Lesson
In the sample issue this month, I showed you a cool intro for ‘Tea For Two’. In this lesson we’re going to learn the chord changes for this classy standard.
Tea For Two - Hip Chord Changes - Chart
Tea For Two - Hip Chord Changes - Chart
Tea For Two - Hip Chord Changes - Chart Part 2
Tea For Two - Hip Chord Changes - Chart Part 2

Gypsy Jazz Secrets Magazine is a digital-only, multimedia magazine featuring gypsy jazz articles and interviews with guitarists from around the world, as well as guitar lessons and performances.

Tap below for more from Gypsy Jazz Guitar Secrets Magazine