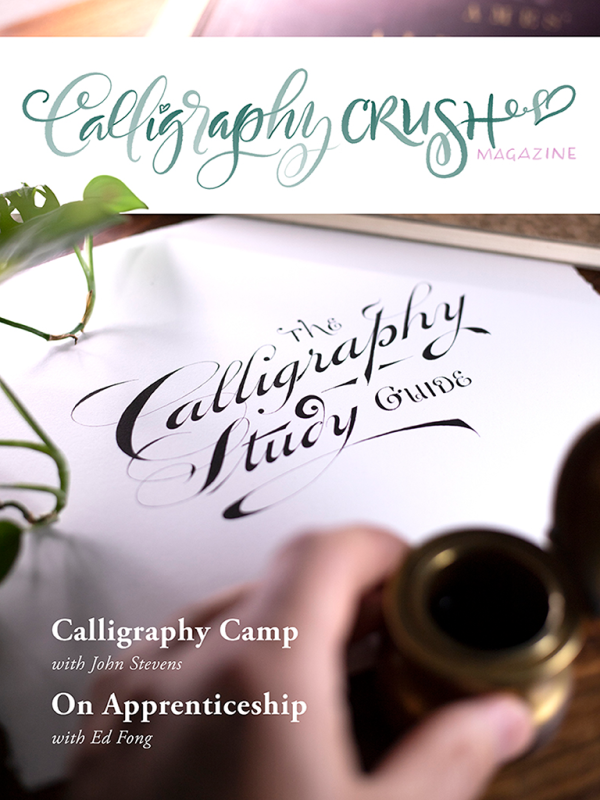 Cover Artist - David Grimes
David Grimes is a penman and calligraphy instructor from Portland, Oregon. As both a teacher and student of historic American penmanship, David seeks to invigorate others in the classic American discipline of Engrosser’s Script. He relies on his experience as a former athletic coach to excite and inspire his students to look deeply at the letterforms they study.
Intense Spencerian - The Spencerian Saga with Harvest Crittenden
If you ever wanted to immerse yourself in the study of Spencerian writing, spend hours poring over master penmen’s 150-year-old exemplars, and make new friends who share your passion for historical lettering, then book your ticket for the next Spencerian Saga.
Calligraphy Camp - John Stevens
Though a world-renowned artist of the written word, Stevens is the camp counselor you knew as a kid, the one that draws you into the setting, helps you let go, make friends, and enjoy your retreat. Find out more about the Cheerio calligraphy retreat in Winston-Salem, North Carolina.
On Apprenticeship - Ed Fong
Ed Fong discusses the apprenticeship relationship and its merits among our 21st-century renaissance of calligraphy.
Signs of Distinction - Dave Smith
Step back in time and experience the feeling of apprenticing with a master sign painter and gilder during the Golden Age of craftsmanship. David A. Smith can guide you through the complex process of reverse sign painting and gilding in his studio in Torquay, England.
Grow by Limiting Your Options - Holly Monroe
Calligraphers are faced with an overwhelming variety of historical and modern scripts to choose from for study. They can also go in many directions to make money from calligraphy. But to improve as a calligrapher, or to grow a calligraphy business, Holly Monroe advises limiting your options.
The Importance of Calligraphy Mentors - Maria Helena Hoksch
Maria Helena Hokcsh believes that if you want to make progress as a serious calligrapher, it’s better to find a mentor to study with for many years rather than taking a lot of workshops from different teachers.
Conferences, Workshops & Online Classes
Attending in-person classes with talented instructors is the optimal way to learn calligraphy, but online classes offer an alternative when you aren’t able to attend classes in person. We share a list of popular resources for calligraphy instruction.
Tutorial - The Art of Correcting Mistakes - Tamara Stoneburner
Many a calligrapher views the making of a mistake in one's lettering and art piece as a bane and the devil in the details. Some even attribute this to our own calligraphic demon, Titivillus. Oh, the gnashing of teeth, cursing, and gnattering at the eleventh hour when faced with figuring out what to do.
Tutorial - Calligrams - Holly Monroe
Calligrams are designs in which words create an image that illustrates the meaning of the words. Holly Monroe demonstrates designing clever calligrams using animals as the theme.
Tutorial - Designing Notepads - Brenda Griffin Smith
Brenda Griffin Smith shows how to design notepads that can be used as party favors or vendor gifts.
Behind the Scenes - Smile, Breathe and Go Slowly - Carol DuBosch
Carol DuBosch shows us how she designed a quote by Thich Nhat Hanh. She likes how the ink puddles and creates almost a sense of a “pulse” on the page and the flourishes take your eye from word to word.
Behind the Scenes - Decorative Letter Design - Tri Le
Tri Le walks us through the creation of a beautiful decorative letter.
Calligraphy Q&A - Nina Tran
Nina Tran answers questions about learning calligraphy.
How to Pick a Pen Holder - Dr. Joe Vitolo
Dr. Joe Vitolo shares the most important thing you need to know when selecting an oblique pen holder.
What to Bring to Workshops
Workshops and conferences are exciting to attend, but if you’ve never been to one, we have a few pointers on how to prepare for your class.
How to Modernize a Historic Hand - Maria Helena Hoksch
Calligraphy needs to continually evolve. If we only study the old and never modernize it, calligraphy will eventually die out. So how do you modernize a hand? Maria shows us how.
Refining Your Design - Combining Script Styles - Carol DuBosch
Carol DuBosch shares an example of how she selects and combines lettering styles in a piece of calligraphy. And how she sometimes breaks the rules.
Let's Practice - Forming a Study Group
Study groups offer an informal setting for practicing your lettering with others who share your passion for calligraphy. Belonging to a group will motivate you to practice since peers can hold each other accountable for keeping up with their calligraphy studies.

Available for viewing on tablets and smart phones only. The desktop version will be available soon. 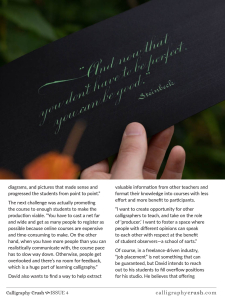 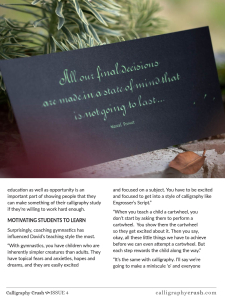 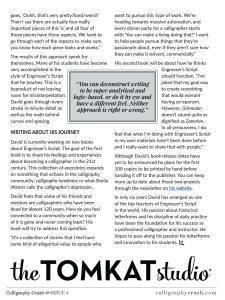 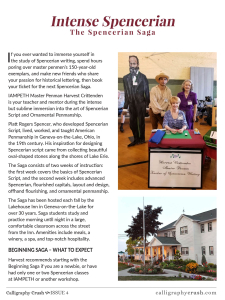 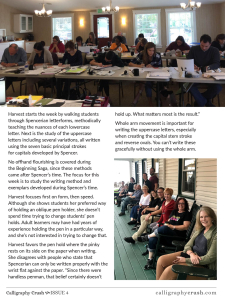 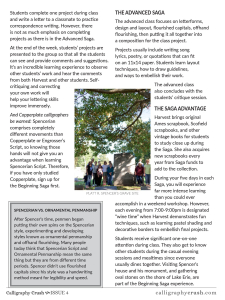 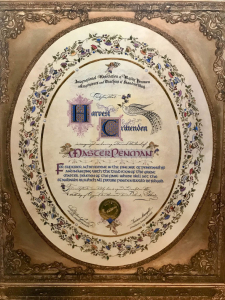 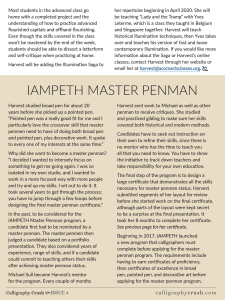 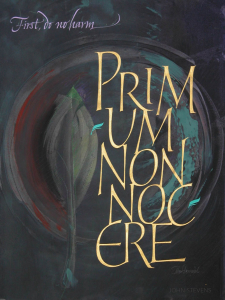 Calligraphy Crush Magazine’s mission is to inspire, educate, and entertain calligraphers and hand lettering artists who create beautiful lettering as a... read more

Tap below for more from Calligraphy Crush Magazine